Carole Davis on Sex and the City

Carole’s songwriting career includes Slow Love, written for Prince and recorded by Prince on the Grammy Award winning album, Sign O’ the Times.
Carole recorded her own version of the song on her Warner Bros record, Heart of Gold.

See Carole’s Riviera Rescue story of how 6 dogs were saved from euthanasia in Los Angeles shelters and airlifted to Nice to loving adoptive homes here on the Riviera.
The rescue was on the front page of Nice Matin and was featured by France 3. 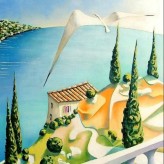